Being a biological product, the tusks are comparatively soft. The hardness of the ivory and so the suitability for carving vary depending on the origin, the habitat and the sex. So ivory from West and Central Africa is supposed to be the best because it is harder. At the same time it is more elastic and therefore more suitable for carving than ivory from the eastern or southern Africa or from Asia.

What does ivory consist of?

The structure of ivory resembles the structure of bones. It consists mainly of calcium and phosphate. But it contains also minerals, the origin of which can be traced back to the places, where a certain herd of elephants searched their feed and where they drank.

How long are tusks? 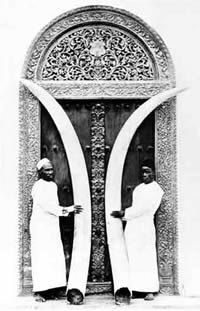 The tusks of the Asiatic elephants are generally smaller than those of the African elephants. The longest tusk of an African elephant measured 3.264 meters, the heaviest one weighed 102.7 kilograms.

With the Asiatic elephants, the longest tusk was 3.02 meters and the heaviest one weighed 39 kilograms.

How wide-spread is the ivory trade?

Before the CITES (Convention on International Trade in Endangered Species of Wild Fauna and Flora) prohibited the trade of ivory in 1990, 3/4 of the raw ivory in the world were worked in the carving workshops of Asia. From 1980 until 1986, Japan consumed most ivory. That means about 38 % of the annual total amount of 800 tons.

The Japanese carvers used up the major part of the ivory for music instruments containing ivory components and for seals. Big ivory carvings existed and still exist aslo in China, Hong Kong and India. Here primarily jewellery and ornamental objects are made and sold to tourists. 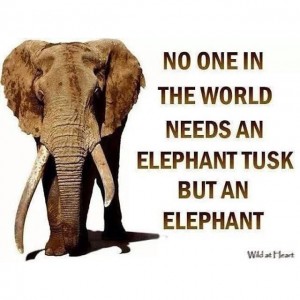 What does ivory cost?

Some people pay a high but illegal price for the ivory. On the black market a kilogram of ivory brings up to 2000 dollars, a whole tusk up to $ 50,000

An alternative to the ivory of the African elephants would be these Mammut tusks!