What does the word “musth” mean?

An essential part of the problems of the keeping of elephant bulls is the so-called musth. Musth is a word of Persian origin and is translated in the languages of Northern India by “condition of poisoning”. The word musth is used to describe an abnormal behaviour or the behaviour of a drunk, whether human being or elephant.

The musth can be defined as a periodical change of the behaviour of elephant bulls, which can last from some weeks up to some months. This change has got hormonal reasons. In the musth period a bull produces 40 to 60 times more of testosterone (male sex hormone) than in the non-musth time. As far as I know, this phenomenon occurs with elephant bulls only – particularly with Asian elephant bulls.

How do elephant bulls change in musth?

The musth changes the character of an elephant bull in various ways:

Physical symptoms of the musth are: 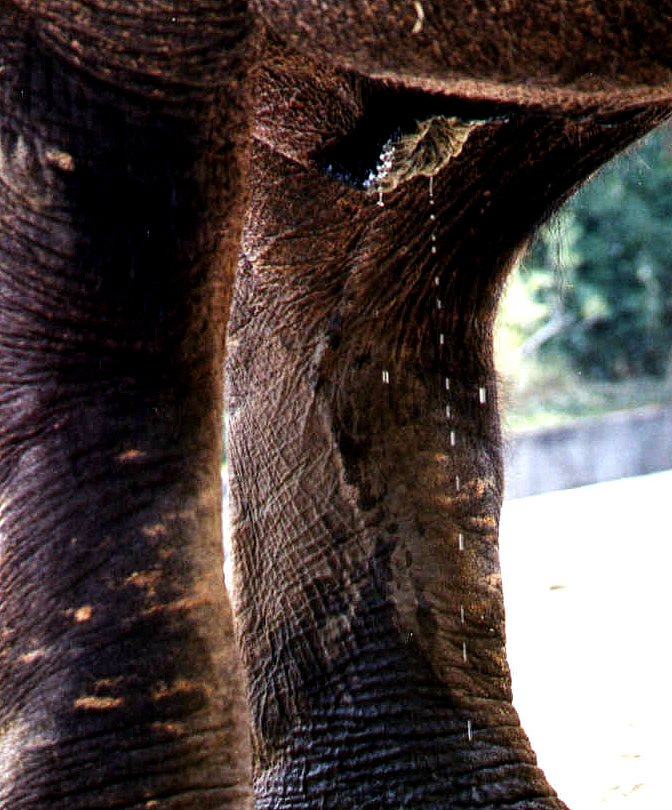 Mental symptoms of the musth are: 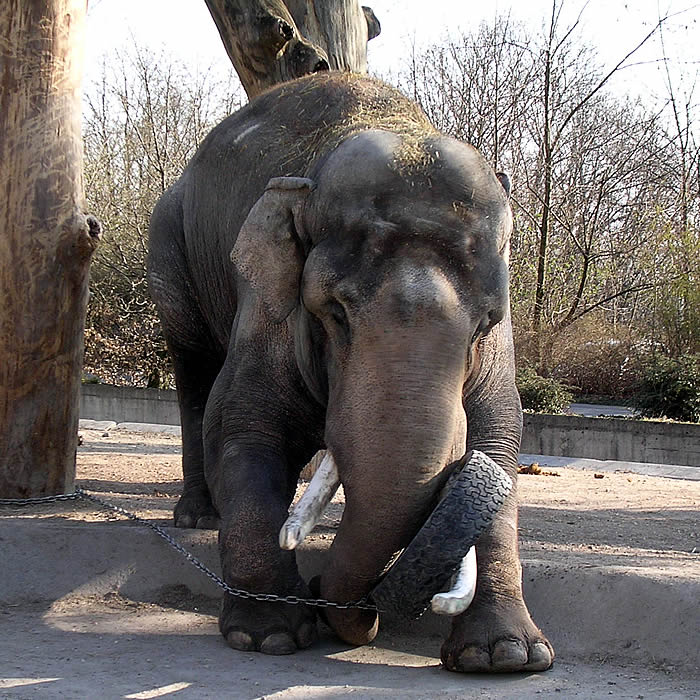 Of what significance is musth when looking after elephants?

These symptoms complicate the contact with the bull considerably.
It is also very discouraging for the elephant keeper to work with a withdrawn, extremely aggressive elephant, which disapproves everything and actually is out to kill him.

The danger of the musth for the elephant keeper is that the bull usually at first doesn’t have any outer physical musth symptoms. This is one of the main reasons, why the elephant bull has to be kept in a special bull stable, where there is no direct physical contact to the keeper. If the bull would be kept like a female elephant, sooner or later a bad accident would certainly happen.

Can the beginning of musth be predicted?

With Maxie, the elephant bull in the Zurich zoo, it is conspicuous that, about two months before it is obviously in the musth, the floor of its stable begins to foam when it is washed out.

Is musth a bulls’ rutting time?

The opinion of many zoo visitors that a musth bull would be in his rutting season, is absolutely wrong. Musth has nothing in common with rut. The elephant bulls don’t know a rutting season like deers or antelopes, because the oestrous cycle of the female elephants is not seasonally timed.

Does a bull in musth spend time with the elephant group?

Why do elephant bulls go into musth?

Actually there is nothing known about the purpose of the musth. Every elephant researcher and every elephant keeper has got his own opinion. Usually the ideas are about the marking of territories, the expelling of other bulls from an area and about the possibility that also a physically weaker bull can reproduce itself this way. The musth seems to be a remnant from the elephants’ prehistoric time, which has endured up to the modern age.

As the musth is no disease or other pain, it cannot be prevented or treated. The musth is part of the natural behavior of the elephant. I don’t know if the bull feels well in the musth or if it doesn’t; if it has a headache when it presses its head against the iron bars or if it is simply furious and angry and wants to be left alone. Above all, it can’t stand sudden movements and noise. Moreover it is very likely that the skin of the hind legs causes pain to the elephant because it is irritated by the constant dripping of urine.
The musth period of the Zurich breeding bull “Maxie” is always in winter. This let the idea arise that the musth could be connected with light and thus with the exposure of the pituitary gland.

What significance does musth have for a working elephant?

As for working elephants, the musth means of course also a loss of earnings for the mahout. To minimize the musth period of the working bull and the loss of earnings, the musth bulls are treated drastically. Musth bulls are tied to two strong trees and set free again only when the must is over. During this time the bulls get very few food and drinking water. The idea that the musth is shorter when the bull has a hard time seems to be true. So the musth of working bulls lasts several days and not 5 to 7 months like for some zoo elephants. Our ethics and morals forbid us to treat zoo bulls in our world like working bulls in Asia.

What significance does musth have for the breeding of elephants?

The musth also impairs the breeding of elephants. Because a cow elephant has only 3 to 4 times a year an oestrous cycle and because it is conceptive only 3 to 4 days then, it will – together with the long musth periods – continue to be difficult to breed elephants successfully.

7 thoughts on “Musth of the elephant bulls”